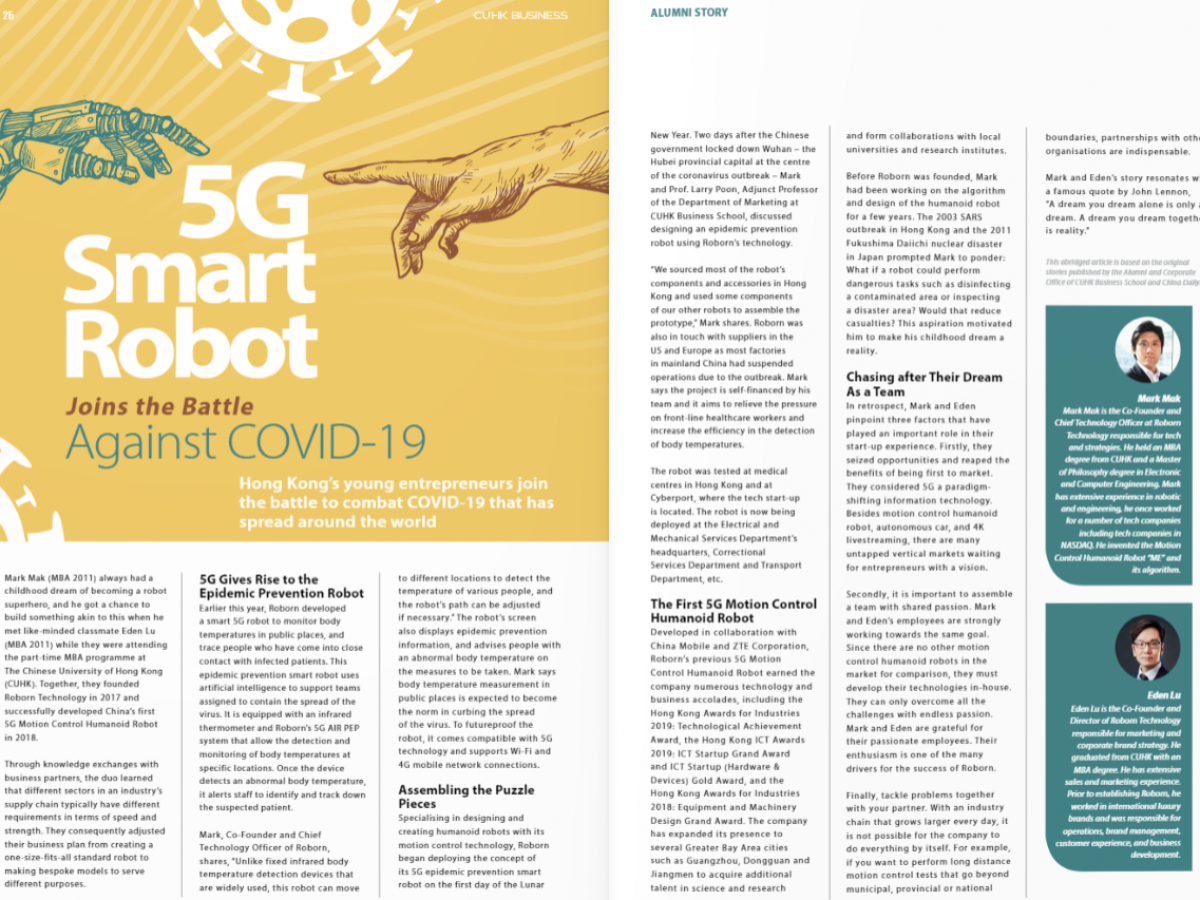 Roborn's two co-founders Mark Mak and Eden Lu, who were alumni of CUHK's MBA programme, were both featured in the June 2020 issue of CUHK Business Magazine. The article shared the stories behind the 5G epidemic prevention smart robot and the first 5G Motion Control Robot. They also discussed the important factors that led to their success today.

Mark Mak (MBA 2011) always had a childhood dream of becoming a robot superhero, and he got a chance to build something akin to this when he met like-minded classmate Eden Lu (MBA 2011) while they were attending the part-time MBA programme at The Chinese University of Hong Kong (CUHK). Together, they founded Roborn Technology in 2017 and successfully developed China’s first 5G Motion Control Humanoid Robot in 2018. Through knowledge exchanges with business partners, the duo learned that different sectors in an industry’s supply chain typically have different requirements in terms of speed and strength. They consequently adjusted their business plan from creating a one-size-fits-all standard robot to making bespoke models to serve different purposes.

Earlier this year, Roborn developed a smart 5G robot to monitor body temperatures in public places, and trace people who have come into close contact with infected patients. This epidemic prevention smart robot uses artificial intelligence to support teams assigned to contain the spread of the virus. It is equipped with an infrared thermometer and Roborn’s 5G AIR PEP system that allow the detection and monitoring of body temperatures at specific locations. Once the device detects an abnormal body temperature, it alerts staff to identify and track down the suspected patient.

Mark, Co-Founder and Chief Technology Officer of Roborn, shares, “Unlike fixed infrared body temperature detection devices that are widely used, this robot can move to different locations to detect the temperature of various people, and the robot’s path can be adjusted if necessary.” The robot’s screen also displays epidemic prevention information, and advises people with an abnormal body temperature on the measures to be taken. Mark says body temperature measurement in public places is expected to become the norm in curbing the spread of the virus. To futureproof the robot, it comes compatible with 5G technology and supports Wi-Fi and 4G mobile network connections.

Specialising in designing and creating humanoid robots with its motion control technology, Roborn began deploying the concept of its 5G epidemic prevention smart robot on the first day of the Lunar New Year. Two days after the Chinese government locked down Wuhan – the Hubei provincial capital at the centre of the coronavirus outbreak – Mark and Prof. Larry Poon, Adjunct Professor of the Department of Marketing at CUHK Business School, discussed designing an epidemic prevention robot using Roborn’s technology.

“We sourced most of the robot’s components and accessories in Hong Kong and used some components of our other robots to assemble the prototype,” Mark shares. Roborn was also in touch with suppliers in the US and Europe as most factories in mainland China had suspended operations due to the outbreak. Mark says the project is self-financed by his team and it aims to relieve the pressure on front-line healthcare workers and increase the efficiency in the detection of body temperatures.

Developed in collaboration with China Mobile and ZTE Corporation, Roborn’s previous 5G MotionControl Humanoid Robot earned the company numerous technology and business accolades, including the Hong Kong Awards for Industries2019: Technological Achievement Award, the Hong Kong ICT Awards 2019: IC T Startup Grand Award and ICT Startup (Hardware & Devices) Gold Award, and the Hong Kong Awards for Industries 2018: Equipment and MachineryDesign Grand Award. The company has expanded its presence to several Greater Bay Area cities such as Guangzhou, Dongguan and Jiangmen to acquire additional talent in science and research and form collaborations with local universities and research institutes. Before Roborn was founded, Mark had been working on the algorithm and design of the humanoid robot for a few years. The 2003 SARS outbreak in Hong Kong and the 2011Fukushima Daiichi nuclear disaster in Japan prompted Mark to ponder: What if a robot could perform dangerous tasks such as disinfecting a contaminated area or inspecting a disaster area? Would that reduce casualties? This aspiration motivated him to make his childhood dream a reality.

Chasing after Their Dream As a Team

In retrospect, Mark and Eden pinpoint three factors that have played an important role in their start-up experience. Firstly, they seized opportunities and reaped the benefits of being first to market. They considered 5G paradigm-shifting information technology. Besides motion control humanoid robot, autonomous car, and 4K livestreaming, there are many untapped vertical markets waiting for entrepreneurs with a vision.

Secondly, it is important to assemble a team with shared passion. Mark and Eden’s employees are strongly working towards the same goal. Since there are no other motion control humanoid robots in the market for comparison, they must develop their technologies in-house. They can only overcome all the challenges with endless passion. Mark and Eden are grateful for their passionate employees. Their enthusiasm is one of the many drivers for the success of Roborn.

Finally, tackle problems together with your partner. With an industry chain that grows larger every day, it is not possible for the company to do everything by itself. For example, if you want to perform long-distance motion control tests that go beyond municipal, provincial or national boundaries, partnerships with other organizations are indispensable.