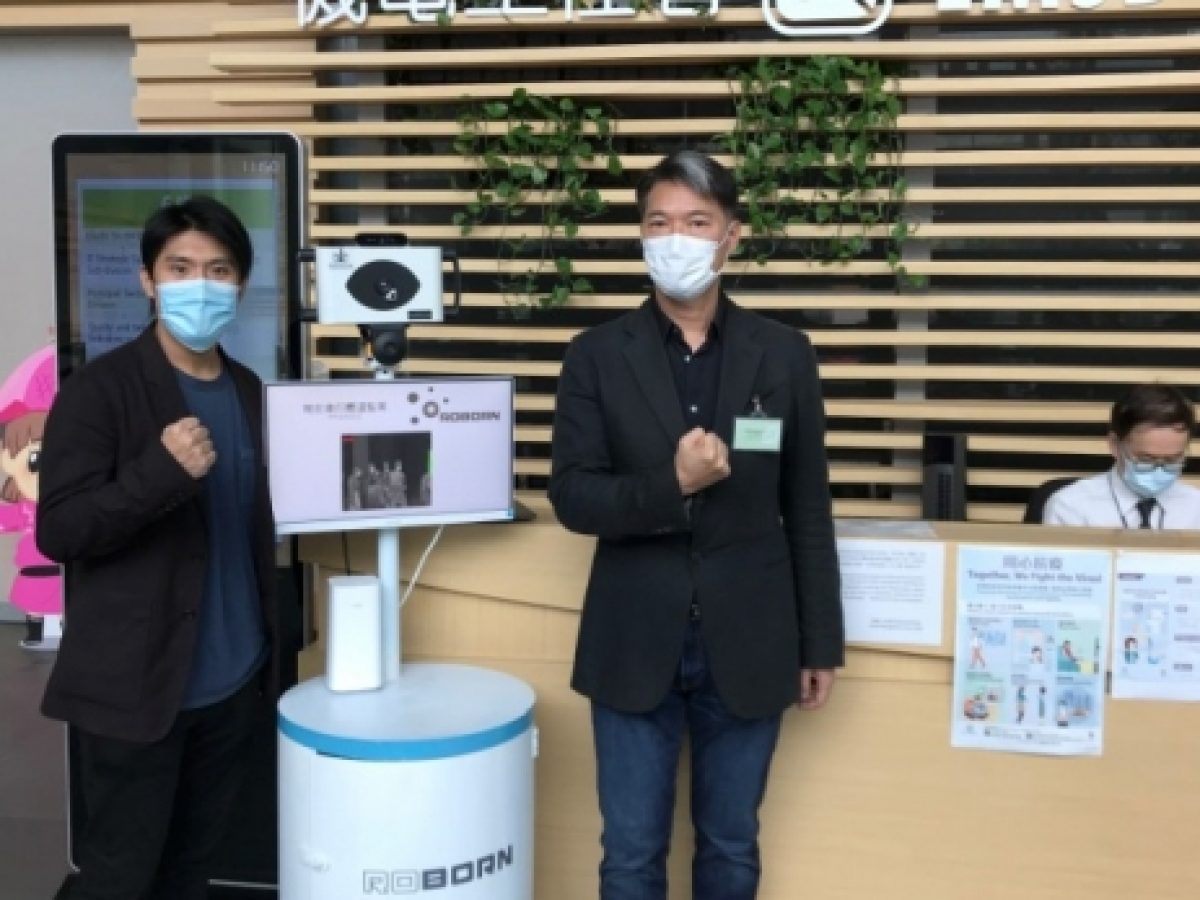 Roborn developed a 5G Epidemic Prevention Smart Robot, combating the epidemic with technology. Once it detects someone with fever, it will immediately keep a record of the time, place, and location of this key contact point to enhance tracing those in close contact with the person. Using AI technology, it can accurately detect human heads, which lowers the risk of contact infection brought by manual operation.

(Below is the translation of an excerpt from the programme transcription)

Lee: After 17 years, we have once again unfortunately encountered another epidemic. Compared to that year, one of the biggest differences may be that technology has improved. Let us discuss how we can combat the epidemic with technology. Today, we have a guest from Roborn Technology, who had previously shared about 5G robots. And just recently, Prof. Poon has joined Roborn as well. Why are you interested in this?

Human-robot cooperation to combat epidemic together

Poon: What matters most is that it is meaningful. Roborn’s founders have always aimed to use technology to make human being a better living, so that humans can avoid taking part in dangerous jobs. I was impressed by them.

Lee: Last time Mark also mentioned that you are advocates of Techanization. Can you give us a general introduction again?

Mak: That wasn’t easy to translate; it took us quite a while to translate it to “Techanization”. We hope to apply technology to different ecologies, for instance education, property management, transportation, and healthcare, which will keep thriving to develop even more technologies, making the ecologies more prosperous.

When we are developing robots, people may think they are just cold machines, or a tool that only obeys instructions on a production line. But our robots have their own characteristics; we hope to achive human-machine cooperation. Our original intention is not to use robots to replace humans, but to assist humans so that they can better showcase their ability.

Lee: When did you start conceptualizing applications for epidemic prevention?

Poon: On 23rd January, Wuhan was on lock-down, and the epidemic became an issue of global concern. On the first day of Lunar New Year, I saw on the news reports that the epidemic was getting serious. I called Mark in the wee hours and suggested to develop an epidemic prevention robot in order to protect the front-line medical staff and alleviate their pressure. Otherwise, there will be a breakdown at the medical defences, and then the epidemic situation will be unthinkable. We haven’t rested doing this project; each person only slept for about ten hours in nearly ten days.

Lee: How can you help the front-line medical staff?

Mak: We have a few types of epidemic prevention robots. The first one is responsible for body temperature detection. The second one is for delivering supplies in isolation wards so that human contact can be reduced. The third one is a disinfection robot which will assist in disinfecting door handles and buttons etc. The three projects are carried out simultaneously, but with different priorities. First, we will be prioritizing temperature detection, since we are seeing long queues everywhere.

The trick to temperature detection

Lee: What difficulties did you encounter while implementing this idea?

Poon: I have some experience in customer touchpoint; I have designed the route for pedestrian flow for shopping malls and buildings. I believe we shouldn’t just focus on entrances. I call buildings, hospitals and cruise ships as a self-contained ecology. When you get inside at eight in the morning and have your temperature taken, it’s possible that there are no abnormalities. However, such warning signs may emerge at noon or in the afternoon. You may catch a fever two days after boarding a cruise ship. Yet if we did not find out in time, the risk of cross-infection increases.

However, it is also impossible to keep deploying staff to chase after people and take their body temperatures, causing a nuisance. Therefore, we hope to invent a surveillance robot. Once it detects a person with fever, it will immediately keep a record of the time, people, and location of this key contact point, so as to enhance tracking those who were in close contact. For example, if the scene of the incident was at a karaoke room where a group of friends were singing, this will be key information to contain the epidemic. We hope we can instantly transmit the information to control centrers, reminding related people to take epidemic prevention measures at once.

Mak: The robot needs to use artificial intelligence in order to analyze thermal images, and this is exactly the painstaking efforts of the team. When the customs use infrared rays to detect temperatures, they often have to deploy some staff at the back to pay attention to the images and see whether there are any abnormalities. Moreover, when people are merely holding a cup of hot coffee at shopping malls, they will also set off the alarm by mistake for sure. While surveillance robots don’t only target people who are crossing the border, arriving one after the other with their luggage. Using artificial intelligence technology, the team taught the robot to analyze what a human head is, so that it can detect human heads accurately, instead of the cup of coffee in one’s hand.

Poon: With AI we can also reduce human contact, which is advantageous to containment strategies. If we deploy a group of staff to analyze images, they may already be infected if they are not wearing any protective goggles but just plain glasses. This is a price not worth paying. After all, the resources for protective equipment are extremely tight; they may not even have the best equipment. This is where the robot comes in.

Mak: Our company is situated at Cyberport, where there are plenty of entrances in its malls and commercial buildings. If we don’t apply artificial intelligence, there won’t be enough manpower for detection at all. For instance, we can’t just set up temperature detection devices and deploy a number of people to monitor the images at each of the ten exits .

Lee: Many buildings have sealed most of their exits in the end. As a result, all of the people gathered at the same exit. Not only the queuing time becomes longer, this also creates critical mass effect, which increases the risk of infecting each other.

Poon: Indeed, it is better to entrust robots to do the task. Once the management staff receives a message from the artificial intelligence, they can immediately take action , which is human-machine cooperation. Using the same rationale, at present door handles and escalators are only disinfected once every four hours. Due to the lack of manpower, we can only do the most basic levels of disinfection. If robots can surveil around, we can clean door knobs often used more regularly, for example disinfect them at every half an hour. This also helps to contain the epidemic. Apart from local demand, we are willing to provide our assistance if there is an overseas demand for epidemic prevention robots. We hope to utilize Hong Kong’s technology and contribute to the global combat against the epidemic.