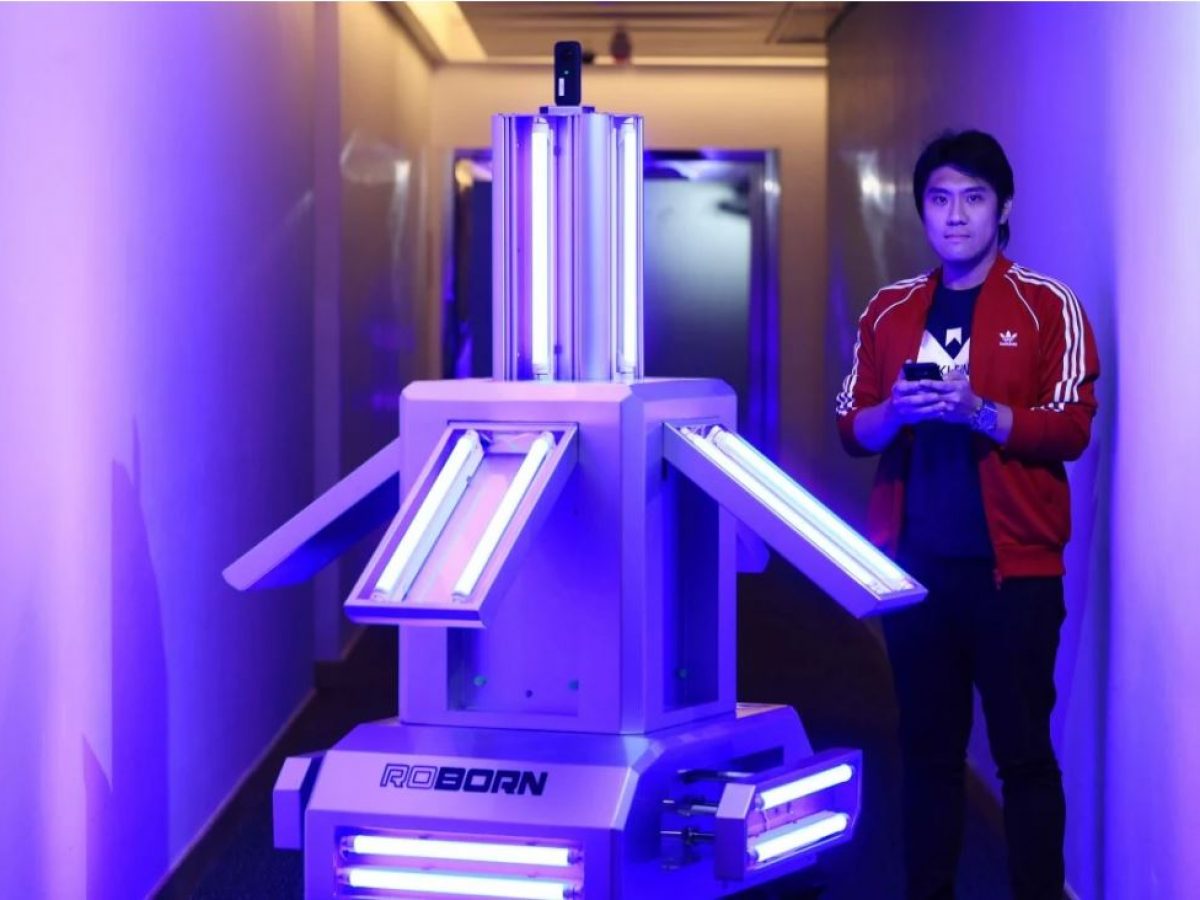 Roborn Technology, which started selling a body temperature-checking robot three months ago, has put its pilot UV light robot to test in a private medical centre and shopping malls. The robot is equipped with a 360-degree camera that can help property management companies keep a record of its sanitation work.

“While nearly everyone wears a face mask in public places in Hong Kong, we still have sporadic new community infections, which raise concerns about contaminated surfaces in public facilities,” Mark Mak Hin-yu, Roborn’s co-founder, said in an interview. “Disinfecting with UV light can be a safer, more thorough and lower-cost alternative to manual cleaning with chemicals.”

But unlike their crowd-scanning and temperature-checking peers that greet people at entrances, the disinfecting robots are not to be seen while doing their jobs, because UV-C light is harmful to human skin and eyes. However, UV-C light, which can break down the DNA of microorganisms, is a proven technology for disinfecting air, water and instruments for more than a century, and was being used in hospitals as early as the 1930s.

A 100 square feet space can be disinfected within just a minute of the robot’s deployment, Mak said. Larger spaces need longer exposure time.

In recent years, multidrug resistant organisms and hospital-acquired infections have been a major reason for the advent and deployment of UV-C light tube-carrying robots in patient rooms, bathrooms, operating and equipment rooms.

The global UV-C robots market is estimated to be worth US$173 million last year, and is projected to grow at a compound annual rate of 32.6 per cent to US$5.6 billion by 2027, according to a report by Verified Market Research.

“Hospitals have already been using UV light to disinfect operation theatres,” Mak said. “What we hear from local hospitals is that they want to use the robots in medical waste storage areas, which need to be disinfected very regularly amid the pandemic. This is currently mostly done manually.

“Similarly, property management firms have told us their high-priority areas for regular disinfection are cargo lifts, toilets, waste storage areas and corridors leading to them, especially in shopping malls with restaurants where oily surfaces are tough to clean and disinfect.”

Roborn, founded in 2017, recently signed an agreement with a Hong Kong company to act as distributor of the robots. This company has many business and public-sector clients, Mak said, adding that it aims to sell its UV light robot at under HK$200,000 (US$25,806) each, a third to half of the amount charged by two of its rivals in mainland China and Europe. It has reduced cost by sourcing components through its office in Jiangmen, in China’s southern Guangdong province, and assembling the robots in Hong Kong.

The robots are equipped with a 360-degree camera that can help property management companies keep a record of its sanitation work.