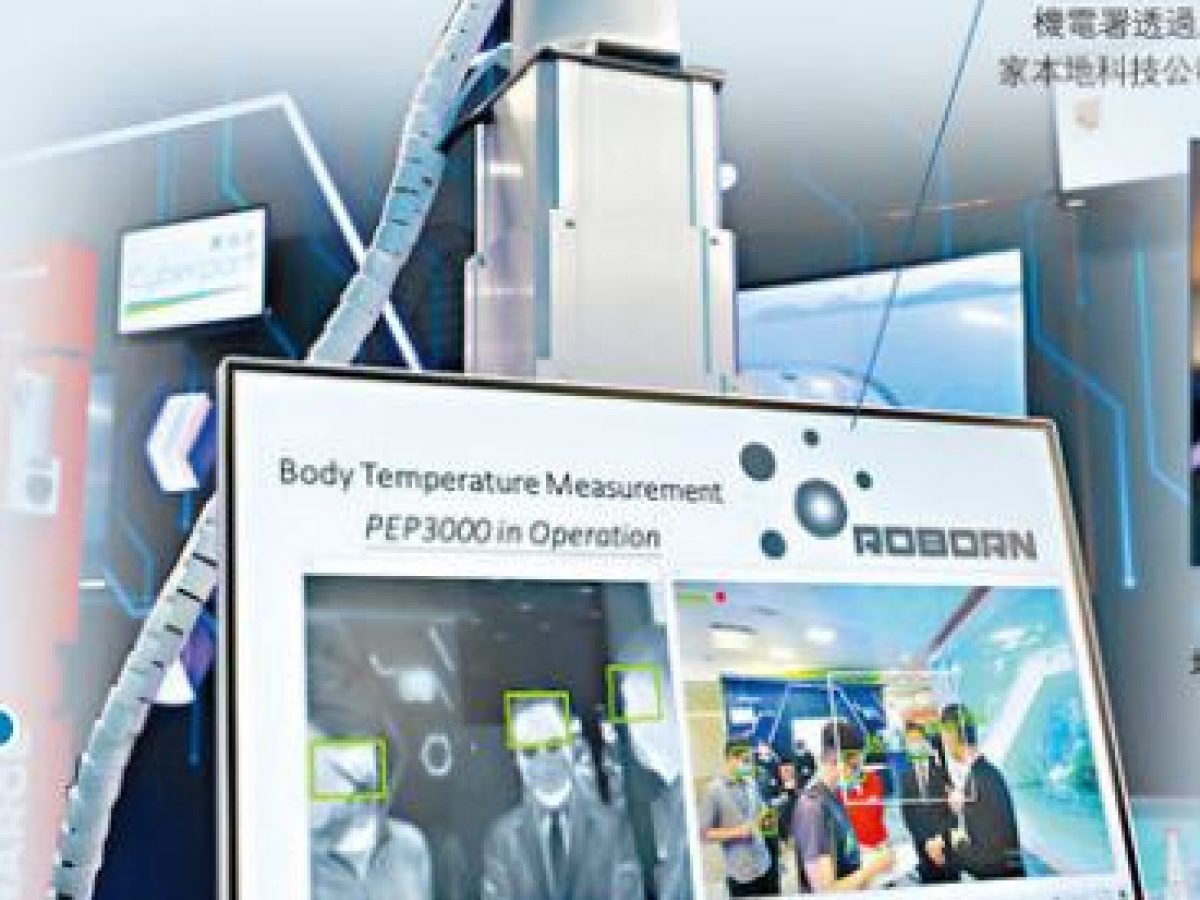 EMSD's special anti-epidemic platform received 217 application in just a mere 3 weeks. The Roborn team said they contacted EMSD in late February; they were arranged to test the mobile body temperature detection robot at CSD, Transport Department, and LCSD sites respectively till 10th March. During the process, they recevied positive feedback from all units, which has helped to continue improve the robot.

The outbreak of the epidemic has caused a huge change in the lives of Hong Kong citizens. Having their body temperatures taken before entering a restaurant has become a must-do action. Learning and taking classes are all done by one click on the Internet. Technology applications which were once unheard of has become an indispensable part when social distancing is necessary today. In order to make better use of science and technology for anti-epidemic, EMSD has added a special anti-epidemic topic page on its “E&M InnoPortal” since February, publishing a series of lists. The plan is to gather innovative solutions from tech enterprises and universities, then arranging suitable projects for trial in different government venues after screening to fight against the epidemic and promoting the development of innovative science and technology.

“Everyone knows that the medical staff are at the forefront under the epidemic, but we also have many colleagues who are responsible for different logistical support work.” Sit introduced that EMSD accumulated experience and learned many frontline anti-epidemic needs while providing electromechanical services, repairs and maintenance for different public facilities. “For example, we learned the importance of improving the filtration system of negative pressure wards in hospitals. And for example, we know that A/C ducts often accumulate dust, which are prone to breed bacteria. Therefore, we hope that targeting antibacterial coatings can be launched. These have become our wishes for fighting the epidemic. “

Nearly half of the applications come from local organizations

The anti-epidemic theme page has received 217 program applications within 3 weeks of its launch. Sit described the response as very enthusiastic, with 93 of the applications are from the local area, and the rest are mainly from Mainland scientific research institutions. “Before a new technology is launched, it must go through the process of incubation, confirming, and commercializing etc. We hope to assist appropriate projects to connect with government sites for trials to obtain information on performance and reliability in a real environment. ” In other words, qualified products will be officially certified by the agency. “There is no interest or commercial consideration behind the government department. The test reports or certifications will give more credibility to the products and will help startups promote their products to the private market. “

He went on to say that the government department for trial can be the first user of the cutting-edge technology projects. Furthermore, it can be more effective in fighting against the epidemic, achieving a win-win situation.

He shared that the Department will identify which technologies are suitable and mature enough in the above scheme. “After preliminary inspection, about eighty percent of them are reliable. We will then gradually invite them to bring their products to us for a detailed review.” Afterwards, the projects will be matched with different government departments and scenes. Among them, a local technology company developed an infrared thermal imaging temperature detection robot, which has been tested in the headquarters building of EMSD, CSD, the Transport Department and the LCSD. ”Most government departments only need temperature detection at the entrances. But for CSD, apart from its entrances, the prisoners inside will move around in different places every day. As for the License Office of the Transport Department, there are plenty of people gathering there all the time. The characteristics of different scenarios are challenges that the mobile temperature robot must overcome. “

Sit said frankly that while people ’s lives have become difficult under the epidemic, but it may be an unprecedented opportunity for innovation and tech companies. “When people shopped before the epidemic, very few of them considered anti-bacterial as their priority, nor did they looked for safe methods of body temperature detection or disinfection; these ideas have completely changed in one epidemic. It is foreseeable that these new technologies will have a lot of room for development.  If they receive the government’s approval on the products’ functionality, they can even be used to assist in the fight against the epidemic, which is an important step to gain a head start. “

The anti-epidemic and innovation technology platform set up by the Electrical and Mechanical Services Department received 217 applications in just three weeks. Sit believes that the figures fully reflect the effectiveness of connecting the innovation technology industry in anti-epidemic. He also revealed that the Chief Executive felt surprised hearing the reports. The local scientific research team that developed a mobile temperature measurement robot said that after contacting the EMSD at the end of February, they were arranged for conducting trials at CSD, Transport Department and LCSD venues till March 10. During the process, they actively received feedback from various units, which helps them to perfect the product continuously.

Mak continued by saying that the team contacted EMSD at the end of February. They went to the EMSD headquarters on 2nd March for primary review. By the 5th they were already arranged to conduct trials at CSD. On the 9th and 10th, they went to the Transport Department and LCSD respectively. The efficiency was surprisingly high.

Matchmaker in the past, now matching products

Sit said EMSD’s “E&M InnoPortal” used to play the role of a “matchmaker”. In response to the service needs of government departments and public institutions, it matched them with the finished products of local startups and provided venues for testing to verify the effectiveness. For this time’s anti-epidemic theme, because the government departments are too busy to respond to the epidemic, they have no time to “make a wish”. In addition to summarizing the list of project categories and reviewing various technological solutions, the Department also has to persuade the relevant department heads how new technology can help in different ways.

Believing positive changes will come one after another

On the other hand, out of the 217 applications, a certain number of them belonged to Mainland science and technology machinery companies. Sit pointed out that with the logistics services blocked in the epidemic situation, it is also difficult to ship products to the EMSD for inspection. However, the department has been processing them actively. “Afterall, we are positioned as the government’s enabler of innovative technology. We have to act quick, otherwise, for the same demand, which is already being made in other places, we may lose the opportunity if we react slower.”

n fact, in the past, the SAR Government ’s attitude of “resisting innovative applications” was criticized by many science and technology industries. Sit frankly stated that in order to ensure the proper use of public funds, officials often develop a “cautious” habit. When choosing a service or product, they want confirmation that they are ready to be used, which conflicts with encouraging innovation. However, in recent years, the government has adopted a new procurement policy to provide incentives. Service providers who support innovation can have an advantage. The overall atmosphere has changed greatly. “Even if we do not consider the impact of the epidemic, Hong Kong’s human resources are tight, and some facilities are also aging. How we should use technology to assist in updating and reducing manpower requirements is a problem that we need to deal with. ” He believes that such positive changes will come one after another in different departments.